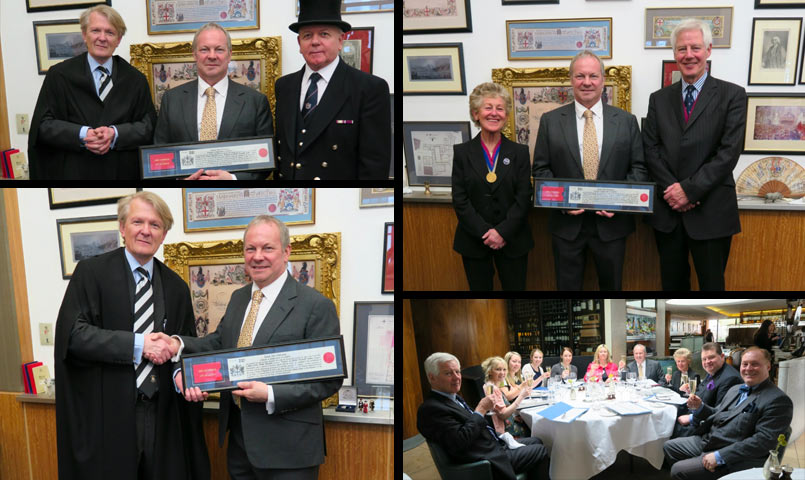 In late 2014 David Wilkinson began the process to become a Liveryman at the Worshipful Company of Glass Sellers.

The Worshipful Company of Glass Sellers of London was granted a charter by King Charles II in 1664. The original purpose of the Livery was to regulate glass trade within London, to ensure quality and fair trade. Nowadays  the Company’s objectives have moved to promoting the properties of glass in schools and helping with glass education projects in the City of London and elsewhere around the country. The company actively promotes the use of glass in arts, crafts, science and technology. At present our Company has around 200 Liverymen, a large number have  connections with the wider glass industries. However membership of the livery today is not restricted to people actively connected with the glass industry.
Liverymen are bound together by attending the quarterly Court Dinners,  social events and Livery Company Church services which are held twice a year.

On March 24th 2015, David was granted Freedom of the City of London. The ceremony took place in the Chamberlain’s Court at Guildhall and was conducted by the Clerk of the Court, Murray Craig. The Freedom of the City of London ceremony is thought to be one of the longest running traditional ceremonies with the first freedom granted in 1237. David was delighted that The Clerk of the Worshipful Company of Glass Sellers, Vincent Emms, was able to attend the freedom ceremony alongside his wife Jo, who has a strong history in the glass selling industry and is a previous master of the Company. Following the traditional ceremony David enjoyed a celebration lunch alongside family and friends.

As a member of the Glass Seller’s David has already enjoyed several events including Court Dinner’s at Clothworkers Hall and Stationer’s Hall and hopes to attend the lectures organised by the Company as well as their charitable events and more traditional events including the Lord Mayor’s Show. The next step for David is to be clothed by his livery company on the 11th June. 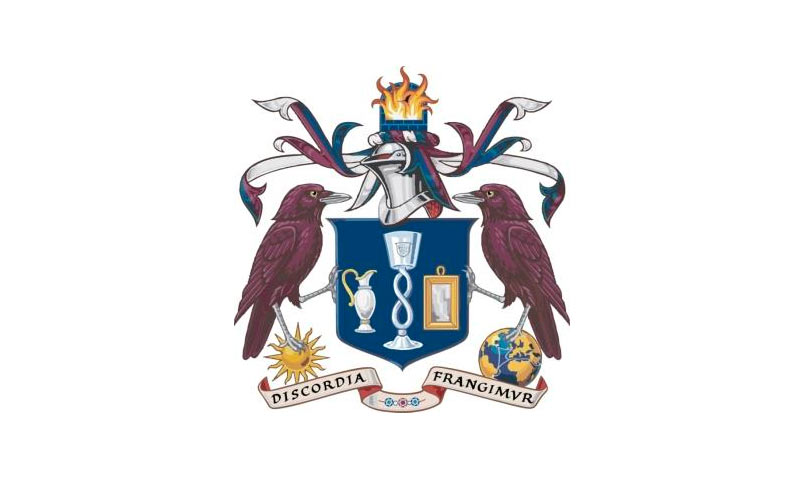 The Coat of Arms for the Company has developed to symbolise the identity and reflect the heritage of the glass selling industry. Azure blue was the original colour used (since the formation of the Company in 1664) however, during the Second World War, blue & maroon ribbon were some of the only colours you could get hold of, so the colours were changed and are still used today. The shield bears a jug, representing ceramics, a Venetian glass, representing glass containers and skilled glass engraving and a rectangular mirror, first made at the time the Glass Sellers Company was founded. These were the only product types sold when the Company was founded and continue to be sold today.
The two ravens represent the Company’s historic connection with George Ravenscroft, who developed lead crystal glass. The sun is for enlightenment, the Company offers education through their ‘Glass in Society’ project and through individual bursaries. The globe represents the global markets. Glass objects, found in sunken ships, have helped track trade routes and improve our knowledge of the history of glass making. Flames are shown rising out of a furnace to represent the heat essential to making glass for any application. And finally “Discordia Frangimvr” which may be translated as “we will be broken by discord”. All of these elements offer just an insight it to the elements that together form the glass industry for which we are part of.