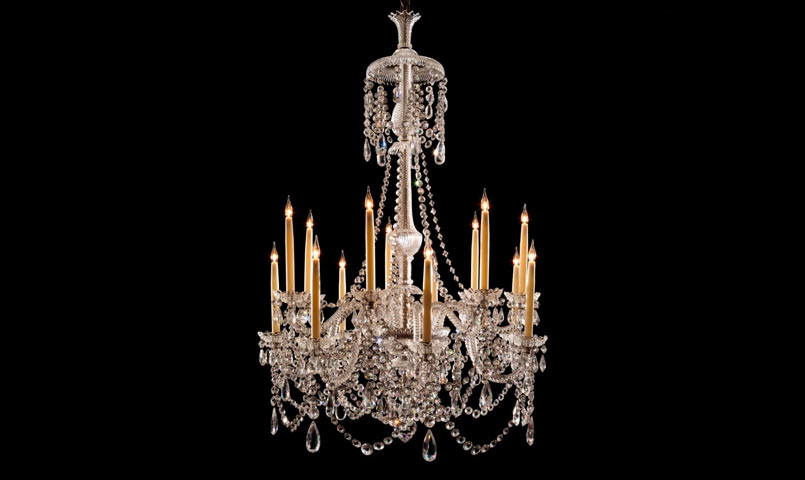 One of the most stunning pieces that we have available to purchase is a 14 light antique Perry that we restored at our workshops. It was previously in residence at The Haberdashers Company, Bassishaw, City of London, their previous hall having been destroyed in a fire following an air raid in 1940,they bought it from a dealer (probably Mrs Crick) , however when they moved to a new property in West Smithfield in 2002 the chandelier was no longer considered suitable for the more modern building and was put into storage. Several years later the chandelier was bought out of storage to be sold, but many parts were damaged. A quote was offered to restore the chandelier and sell it on their behalf, but they chose instead to accept our offer to purchase the chandelier as it was.

There were many elements that required restoration including 7 broken arms, a broken bottom canopy, crystal dressings missing and some that were incorrectly pinned as well as the whole fitting requiring rewiring and the metalwork required attention as the silver plate had tarnished. 5 of the 7 arms were snapped at the base near to the central stem of the chandelier, however these could continue to be used on the chandelier by replastering the arms back into their metal mounts and changing their angles slightly, so that when they were positioned on the chandelier it appeared balanced and as though no damage had ever taken place. The remaining 2 arms were so damaged there was no hope that they could be restored, it was also not possible to find original Perry replacements, instead we made 2 new arms. These were created by a highly skilled UK based glass blower who produced them in English lead crystal, making them indistinguishable from the originals.

Although areas of the lacquer had flaked off the metalwork and a small amount of tarnishing had taken place, in general the original silver plating underneath was in good condition, we hand polished it and re lacquered to ensure that no further deterioration would take place. The drops and buttons were repinned and any missing or damaged pieces were supplied from our antique stocks, they were then re-arranged to dress the chandelier in the traditional manor. A replacement bottom canopy was also able to be sourced from our stock of antique pieces and is identical to the original.

Finally the entire chandelier was cleaned, the arms were wired with electric candles and now the magnificently restored chandelier hangs proudly in our offices ready to be purchased.

This appears to be one of Perry & Company’s most successful designs and we have restored several models of this chandelier for the National Trust, City Livery Companies, London Clubs and private owners throughout the UK. By coincidence we also restored an almost identical chandelier for Chillington Hall at the same time we were restoring this one. I believe the chandelier we are selling is more original than most of the other chandeliers that have come through our doors because it was in use for a shorter amount of time than those where 150 years of poor maintenance have taken their toll.