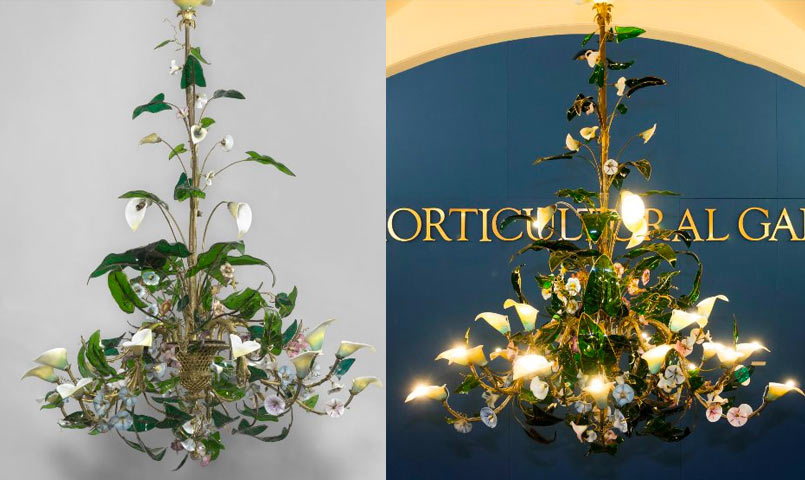 In late 2014 and early 2015 we had the pleasure of restoring this magnificent and unique chandelier by Lobmeyer. The chandelier belongs to The Royal Collection and had been hanging at Osborne House for the last 150 years. It is thought that the chandelier was probably on display at The Great Exhibition in 1851, where it caught the eye of Queen Victoria and Prince Albert.
The chandelier was restored to its optimum so that it could be displayed at The Queen’s Gallery in London as part of the Painting Paradise: The Art of the Garden exhibition, running from 20th March 2015 – 11th October 2015. It is the first time that a chandelier has been displayed at the gallery and is a wonderful example of Victorian workmanship. View details of the exhibition here.

Click to watch the restoration of the Lobmeyer chandelier take place here.

Text adapted from Painting Paradise: The Art of the Garden, London, 2015. Copies of the exhibition book can be bought here.

“A glass chandelier from Osborne House demonstrates the exuberance of floral ornament in the mid-nineteenth century. The chandelier is recorded in nineteenth-century photographs of Osborne, but is not described in any of the late nineteenth-century inventories of the residence. Recent research has revealed that it was probably made by the famed Viennese glass company, Lobmeyr, who were commissioned for many royal and civic chandelier and glass services across Austria and Germany. Archduke Franz Josef of Austria (1830 – 1916) commissioned a large glass table service, and his brother Prince Ferdinand Maximilian, later briefly Emperor Maximilian I of Mexico (1832 – 67), commissioned a chandelier similar to this Osborne example. A sketch survives in Lobmeyr’s archive which unmistakably relates to this chandelier. Arum lilies envelop the candles and morning glories entwine around the leaves. They may have reminded Prince Albert of his childhood home at the Rosenau in Coburg, which featured interior décor of climbing plants and trelliswork in several of the rooms.”