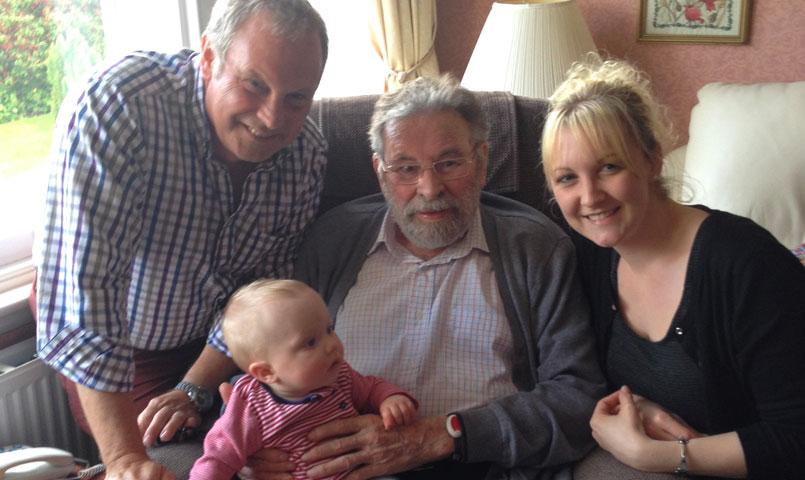 Between them they have almost 100 years experience running the family business that is Wilkinson Plc and this Bank Holiday weekend the generations of Wilkinson’s came together.
Pictured are David, Arthur, Baby Ethan and Jodie.

Arthur joined the business back in 1947 when it was better known as R Wilkinson & Son, working from a small workshop attached to the house alongside his father Reginald, they would sell their decorated glassware to department stores and tableware wholesalers. Over the years the business continued to develop and expand with Arthur retiring and leaving the business in the capable hands of his son in 1986.

David joined the company in the summer of 1974  at the age of 16 as an apprentice glass cutter, he will be celebrating 40 years with the business later this year. He is acknowledged as one of the World’s leading authorities on antique chandeliers and historic lighting having been passed down a wealth of knowledge. David has continued to diversify the business and promote the Wilkinson name, receiving perhaps the highest accolade of the Royal Warrant of Appointment to Her Majesty Queen Elizabeth in 1986, which we still hold today.

David was delighted when Jodie started working part time for the business in the summer of 2005 and even more so when she decided to become a full time member of staff 6 months later. Since then she has developed her knowledge and skills learning from the generations before. Now a director in the business she has every intention of continuing learning and developing the business for many years.

The first Wilkinson grandchild, Ethan was born on 31st October 2013 and there is certainly hope that one day he will want to join the business that has been part of his family for so long.