Our new Kent based glasshouse

Carl Nordbruch, our glassblower for the last 20 years is now blowing glass at Wilkinson's new glasshouse in Sittingbourne, Kent. Carl has over 30 years experience in the glass industry. He started his career at the Isle of White glass in 1987, Carl went on to teach as a technical demonstrator at Wolverhampton University. Within a couple of years he decided to study for a masters degree at the Royal College of... 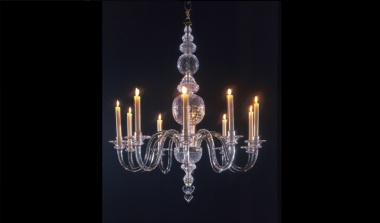 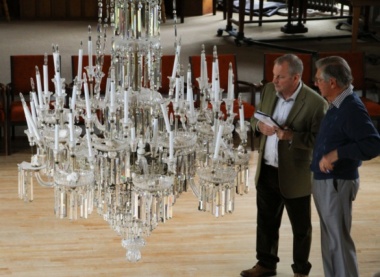 Located in sunny Sidmouth, Devon and now known simply as 'Sidholme',  is a manificent property which is the perfect example of Regency grandeur, built in 1826 and formerly residence of the 6th Earl of Buckinghamshire and the 1st Viscount Cherwell,  the building was purchased in 1931 by the Christian Guild and converted into a hotel that even today offers an inexpensive holiday location for Christians and non-Christians alike in its beautiful... 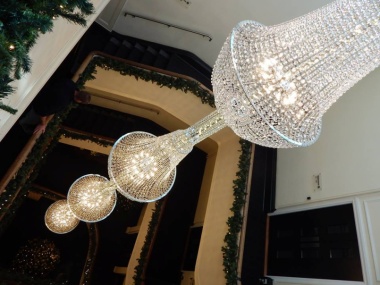 Following hours of labour in our Kent workshop, our creation now hangs in its new home in the central staircase at Hythe Imperial based in Hythe, Kent. Designed, manufactured and installed by our skilled team we are delighted with the result and are sure it will be a real talking point at the hotel especially as it is believed to be the tallest chandelier in Europe!   The chandelier took 3 days for... 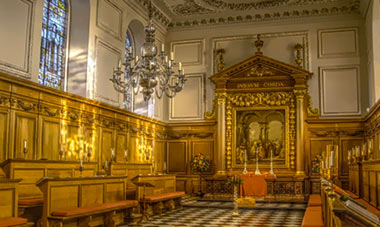 Although we are specialists in restoring antique English chandeliers, it is rare that we get the opportunity to work on such exquisite examples as we did in the Summer of 2017. We were contacted by the Reverend and Dean of Cambridge’s Emmanuel College Jeremy Caddick following some unfortunate damage to their historic chandelier that was suspended in the Chapel. When David Wilkinson examined the chandelier at the Chapel it was a... 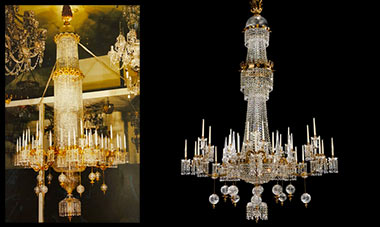 The chandelier is one of a pair that are being restored by Wilkinson (but was one of three). Originally designed for use with gas, it has been adapted to hold wax candles, each of the 5 arms holding 6 candles and can be wired for electricity if required. Restoration works included the manufacture of new lead crystal pieces which were hand cut in out Kent workshops to replace any that... 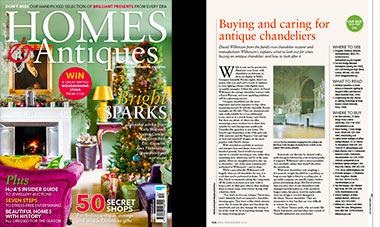 In early October photographer Kasia Fiszer (www.kasiafiszer.com) came to spend a day at our workshops to observe the traditional processes we use to manufacture chandeliers in our Kent based factory and discuss with David Wilkinson the history behind the family business for an article with would feature in the December issue of  Home & Antiques magazine. In an interview with David, he tells of how we have been fortunate enough to have... 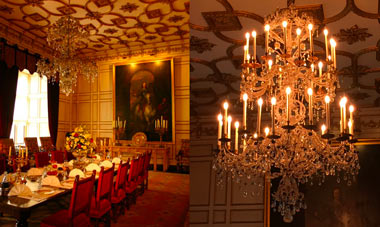 A service that we offer is chandelier restoration and with years of experience in this, we often get the opportunity to work on restoring some of the countries historical lighting. The Wilkinson team spent the late spring of 2016 restoring and wiring a chandelier from the State Dining Room of Warwick Castle. The room has seen visitors including George IV, Edward VII, Queen Victoria and Prince Albert and today the State Dining... 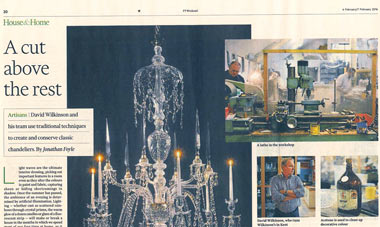 In February 2016 we were privileged to be asked if we would mind having an article written about us in the House & Home supplement of the Financial Times Weekend.It was a wonderful article about the history of glass and chandeliers as well as the history of our company written by Jonathan Foyle who David has had the pleasure of knowing for some years. Accompanying photographs show our skilled staff working... 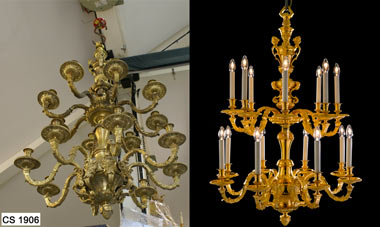 Early in 2015 we purchased a large 16 light brass chandelier from one of our independent polishers who had no need or desire for the chandelier. He believed that the piece had once hung at Cranbrook School in Kent but had since been removed and was looking a little tired (see image on right – before restoration). David Wilkinson decided to restore the chandelier by having it re-gilded as traditionally the... 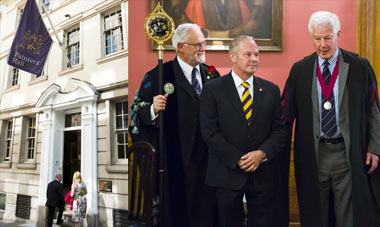 In a previous News article we told you how David Wilkinson had begun the process to become a Liveryman at the Worshipful Company of Glass Sellers. On June 11th 2015 David was officially installed as a Liveryman in a wonderful ceremony that took place at Painters’ Hall. He was presented to the Master Gwen Rhys FRSA by The Clerk of the Worshipful Company of Glass Sellers, Vincent Emms and was formally gowned... 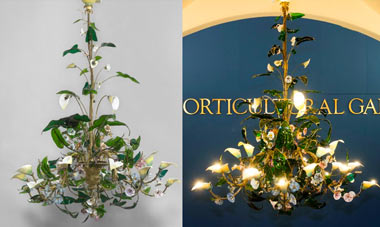 In late 2014 and early 2015 we had the pleasure of restoring this magnificent and unique chandelier by Lobmeyer. The chandelier belongs to The Royal Collection and had been hanging at Osborne House for the last 150 years. It is thought that the chandelier was probably on display at The Great Exhibition in 1851, where it caught the eye of Queen Victoria and Prince Albert.The chandelier was restored to its... 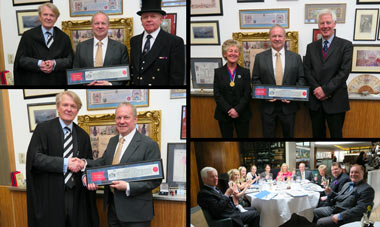 In late 2014 David Wilkinson began the process to become a Liveryman at the Worshipful Company of Glass Sellers. The Worshipful Company of Glass Sellers of London was granted a charter by King Charles II in 1664. The original purpose of the Livery was to regulate glass trade within London, to ensure quality and fair trade. Nowadays  the Company’s objectives have moved to promoting the properties of glass in schools and helping with... 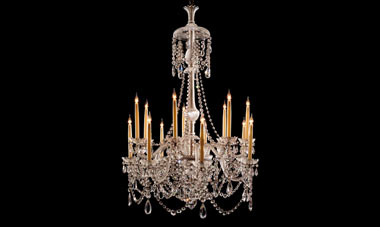 One of the most stunning pieces that we have available to purchase is a 14 light antique Perry that we restored at our workshops. It was previously in residence at The Haberdashers Company, Bassishaw, City of London, their previous hall having been destroyed in a fire following an air raid in 1940,they bought it from a dealer (probably Mrs Crick) , however when they moved to a new property in West Smithfield... 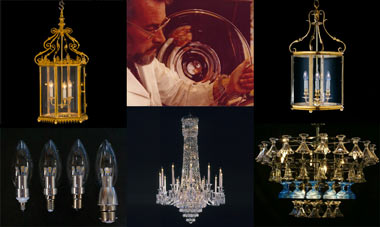 A very busy and in many ways a successful year. One of our largest ever commissions was placed this year, to work on a project for a London based hotel for which we made over 50 chandeliers. This project is still ongoing, but following the business launch in early 2015 we hope to be able to bring you details and images of our work.Lanterns have been a popular addition to many... 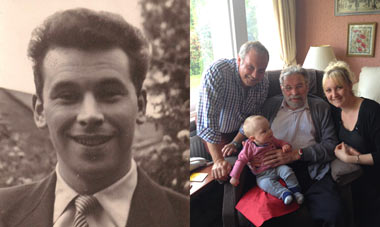 It is with great sadness that we announce the passing of Reginald "Arthur" Wilkinson who died peacefully on Saturday 12th July following a short illness. He will be greatly missed by his family and friends, who will remember him for the generous and loving man that he was as well as his many achievements within the glass industry. Arthur and his father’s began the glass tableware company R.Wilkinson & Son in... 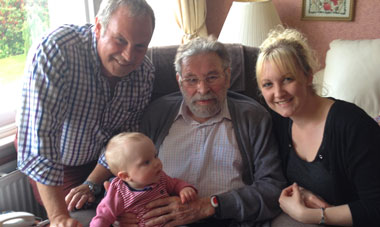 Between them they have almost 100 years experience running the family business that is Wilkinson Plc and this Bank Holiday weekend the generations of Wilkinson’s came together.Pictured are David, Arthur, Baby Ethan and Jodie. Arthur joined the business back in 1947 when it was better known as R Wilkinson & Son, working from a small workshop attached to the house alongside his father Reginald, they would sell their decorated glassware to... 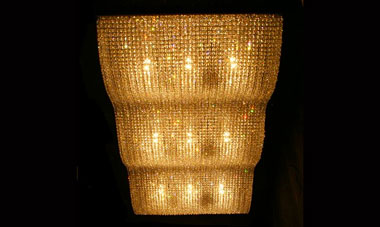 Wilkinson pride themselves on taking on jobs that others cannot and earlier this year we were certainly requested to do this. A unique design created by David Wilkinson based on the clients specification, led to the design of a wave of Swarovski beads. 2 different sizes were commissioned,the smaller with dimension of 1200 x 600mm andthe larger measuring 1800 x 1200mm To produce the waves each bead was hand threaded and woven... 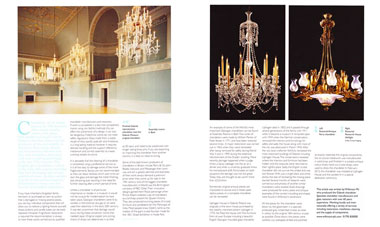 We were honoured to be asked to write an article for the July/August issue of Listed Heritage Magazine.Listed Heritage is a guide to listed property ownership and contains examples of conversions and restoration projects, member’s letters, advice and information. Our article advises owners on the maintenance of their chandeliers for both aesthetic and safety reasons and explains how they can be so easily damaged, especially antique pieces that have been modernised.We... 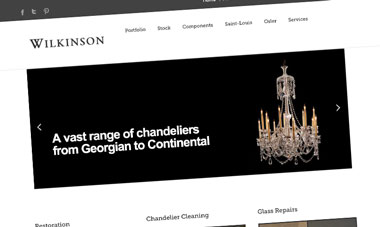 Welcome to our new website. The enhanced “Portfolio” section allows you view a selection of fittings throughout the eras providing you with the details required to help you select your preferential design. In our new “Stock” section you can see a variety of items available for purchase and our redesigned “Components” menu contains many of the items you will require for self installation with additional items available from our ebay link. We... 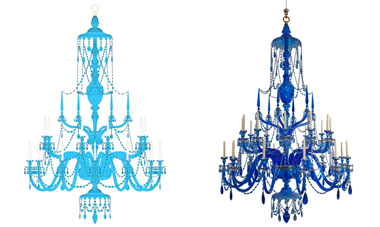 Working for the world renowned Paris based interior designer Alberto Pinto, Wilkinson’s recently completed a magnificent set of three large Adam style chandeliers in blue lead crystal for one of their clients.Each chandelier, weighing in at 180 kg, has 24 lights arranged on 2 tiers with an additional 6 upper arms fitted with decorative triangular spikes. At over 2.8 metres tall and 1.8 metres diameter, they are the largest Adam style... 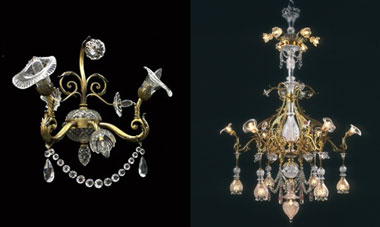 A challenging task was presented in 2012 with the request to manufacture a pair of chandeliers and matching wall lights with only a photograph to go on. The picture was of an early 1900’s F & C Osler chandelier Wilkinson’s restored in the 1990’s which featured both intricate metalwork as well as hand cut lead crystal in numerous shapes. The reproductions were created by altering the original design to meet the... 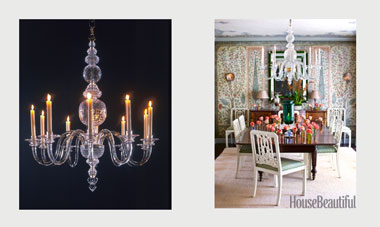 Wilkinson’s supplied one of their Thornham Hall style Georgian chandeliers to the highly acclaimed Interior design company Maine Design of Los Angeles in California.The chandelier is a reproduction of one of the earliest surviving examples of an English Georgian lead crystal chandelier made for Thornham Hall in Suffolk in 1732, this particular version included 10 lights with plain scrolled arms with pans and hand cut lead crystal baluster stem pieces.The... 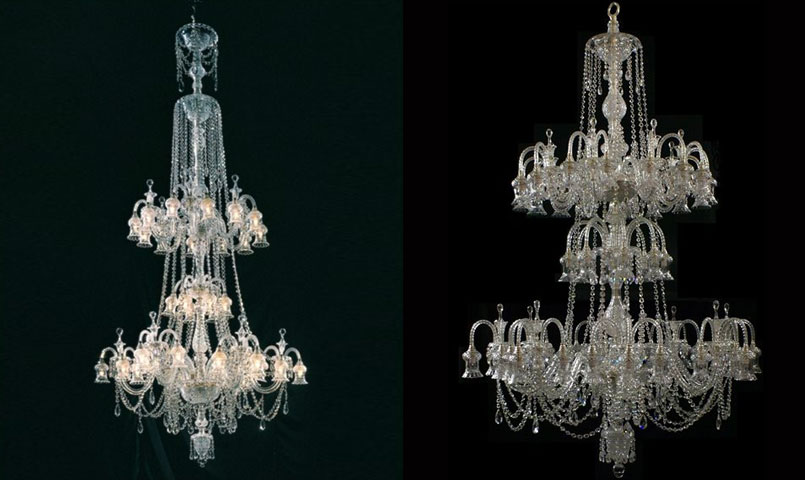 In August 2011 Wilkinson’s completed the manufacture of one of the largest chandeliers they’ve produced in recent years. The chandelier consists of over 3,500 of crystal components with hand cut English Lead crystal pieces and Swarovski crystal pendants, it measures 3 metres in height, 2 metres in diameter, with 48 lights and weighing over 300kg (on right). It was based on an Osler electrolier (design No. 3004) manufactured around 1900 that... 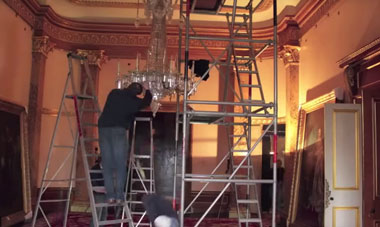 In September 2010 Wilkinson’s was tasked with restoring an original 19th century chandelier that hung in the State Dining Room at Apsley House, London. Home to the Duke of Wellington after his victory over Napoleon at Waterloo up to 1947 when the house was given to the nation by the 7th Duke of Wellington in 1947. It is now managed by English Heritage and is the last surviving great London... 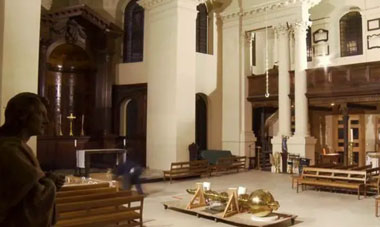 Wilkinson’s installed a magnificent 17th century Dutch brass chandelier in the refurbished St Georges Church in Bloomsbury, London. The chandelier is a rare example of a Dutch chandelier so was carefully wired, cleaned and restored to conserve its original features which include scrolling branches holding 36 lights. Weighing over 700kg it measures 2.8 metres in height and is over 2 metres wide at its core.The chandelier originally hung in a church...