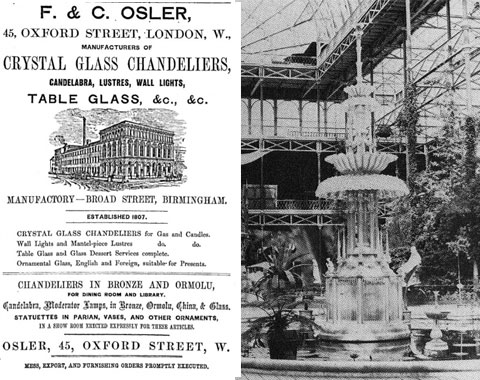 The company Osler was established in Birmingham, 1807 when Thomas Osler found employment at Glass Toy Trade, Hockley, making small glass trinkets. A year into his role an order was placed for icicle drops, upon completion the potential glass drops created was realised and Osler began manufacturing chandeliers.

The business struggled in its infancy due to the countries debt from Napolionic war, high taxes and duties, especially glass. Thomas laid the foundations but the business really began functioning in 1831 when his son Abraham Follett Osler succeeded the company. Unlike his father, a man of education, Follett was a commercial man and with the aid of his brother Thomas Clarkson, he could focus on creating original designs. Clarkson was an admirable character, ably assisting in the progression of the business, opening a showroom filled with the best stock on Oxford Street in spring 1845. In the latter half of the 19th century Osler found success in India, the countries wealth and efficient shipping links led Osler to choose India as its largest market outside the UK.

Success came in February 1847, when a large pair of candelabra, ordered by Egypt’s ruler for the tomb of Prophet Mahomet in Mecca, were on display at the Oxford Street showroom, the novelty and uniqueness of the glass work attracted widespread interest even receiving a visit from H.R.H the Prince Consort (Prince Albert). An even larger pair of candelabrum were created for the Exhibition of Industrial Arts and Manufacturers held at Bingley House, Birmingham in 1849.

Crystal Palace FountainThis event was opened by the Prince Consort and while attending he had the idea to hold an exhibition in London, to be known as The Great Exhibition. For the exhibition, taking place in May 1851, Osler claimed to the commissioners he could create something ‘really worthy, for which the cost and labour would not be worthwhile if it is to occupy a secondary place’, proving himself with a magnificent Gothic style fountain made of pure crystal. The brochure for The Great Exhibition describes the fountain as, ‘.. perhaps the most striking object in the Exhibition; the lightness and beauty, as well as the perfect novelty of its design, have rendered it the theme of admiration with all visitors.’

Clarkson passed away in 1876 and Follett retired later that year, their sons Henry Follett and Alfred Clarkson took on the business, creating new styles of chandelier incorporating the advent of electricity into their work. The name F & C Osler was first recognised on 14th July 1906 when the children and grandchildren of Follett and Clarkson became the first directors.

From 1911 the demand for simple clean pieces of glass was lost and the Birmingham and Stourbridge glass industry saw a massive decline. However the demand for light fittings that included varieties of bowls and dishes and even creations made entirely of metal was flourishing. This request for metalwork coincided nicely with the opportunity to acquire a lighting company named Faraday & Son Ltd in 1919. Founded by Robert Faraday, older brother of famous English scientist Michael Faraday, the company specialised in metal period reproductions. Together they worked from Faradays Wardour Street premises until they were evacuated in 1925, when the decision was made to completely amalgamate the two businesses rather than remaining a subsidiary, they renamed the sales organisation Osler & Faraday Ltd. The new company decided to trade only in wholesale which meant renovating their London premises as well as opening new showrooms in Glasgow, Manchester, Belfast and Cardiff throughout the 1920’s.

The beginning of the end 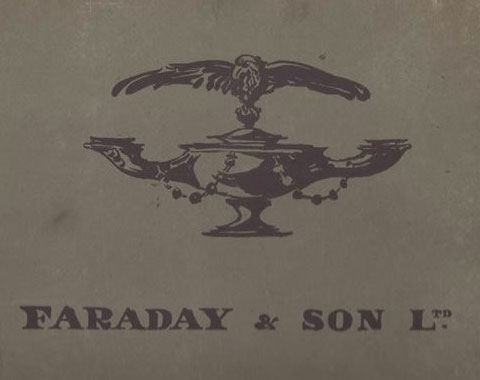 Following the Wall Street Crash in 1929, the demand for trade in India began to falter, further devastation followed on 30th November 1936 when the Crystal Palace burnt to the ground taking with it Osler’s famous fountain. Britain in the late 1930’s was darkening with the impending threat of war and on the 9th April 1941 there was a direct hit on the factory. Fortunately some of the machinery was salvageable, but it was 2 months before any production could take place and 6 months before it was fully re-established.

Following the second World War the company faced immense competition as cheaper methods of lighting were being produced using plastics and the demand for high quality pieces fell. In 1960 along with William McGeoch & Co, an electrical accessories company, Osler & Faraday Ltd purchased the soon to be liquidated company Veritys who produced the well-known “Maxlume” industrial and commercial light fittings and used it as a subsidiary company. All stocks and work in progress was transferred to the Maxlume factory located in Aston, Birmingham. Unfortunately this venture failed and within 5 years Osler & Faraday sold their shares in Veritys lighting to McGeoch’s. The showrooms had all been closed in 1964 and the lease on the glass house was surrendered in 1965. All existing trading ceased on 30th June 1965 after 158 years. 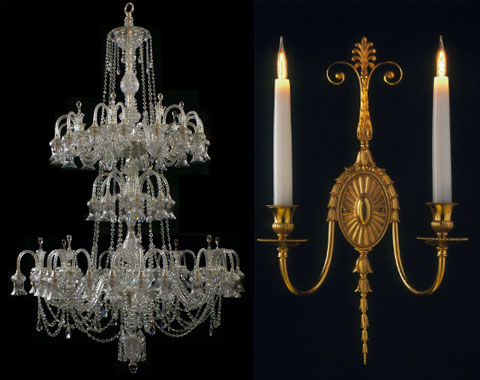 When the company ceased trading the workshop manager took on the patterns and drawings for the company and continued to make a few of the pieces privately. Upon his passing the opportunity arose to purchase the remnants of the company and in 1985 Wilkinson’s acquired Osler and Faraday lighting company, including the name and manufacturing rights to Osler & Faraday Ltd and a large number of their patterns and drawings. This name is now registered to ensure that the legacy of Osler and Faraday’s work continues at the high standard it was known for. The Osler archives, along with the pieces accumulated by Reginald and Arthur, mean the company today holds one of the largest collections of antique patterns and samples in the world. Wilkinson’s are proud to be one of the World’s leading specialist in Osler & Faraday having restored many pieces over the years, from chandeliers to some of the larger pieces of furniture that were so unique produced.

We generally always have a couple of pieces of Osler or Faraday available for purchase, take a look here to see what is currently in our stock.

Our work on Osler 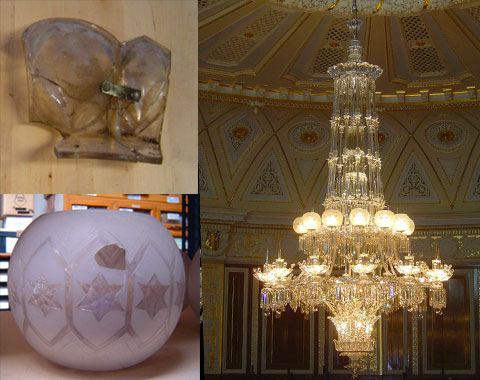 Wilkinson’s has worked on a number of F & C Osler restorations including an 1856 creation for St George’s Hall, Liverpool. Situated in the Concert Room, which was used regularly for elaborate social events in it prime, the chandelier suffered what was thought to be ‘severe damage’ over the years and it was recommended to have restoration works completed (Getty Grant Programme report, 1991).
This work was undertaken by Wilkinson’s in 2005 and took over a year to complete as many of the pieces were damaged and needed restoration or even replacing with items from our own Osler collection, this ensured that the chandelier remained as authentic as possible. After a thorough cleaning, the wiring was inspected and replaced then reinstalled in the Concert Room.