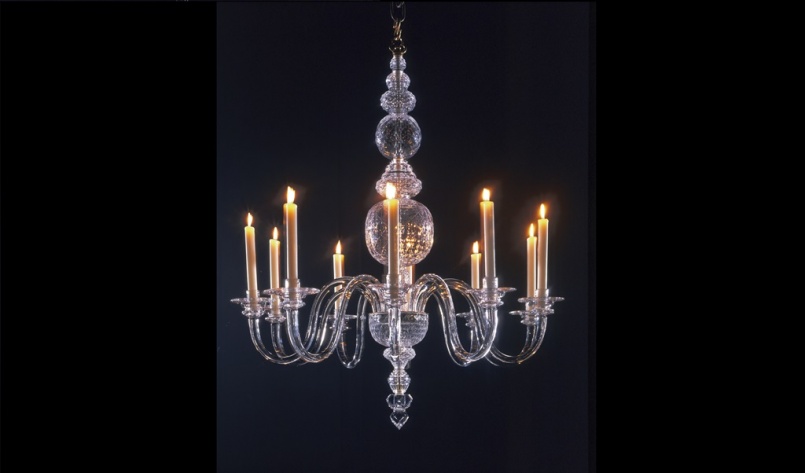 The original Thornham Hall chandelier is widely acknowledged as one of the earliest examples of an English crystal chandelier. Thornham Hall was a large stately home in Suffolk in the east of England and it is understood that they acquired their crystal chandelier in 1732. There are two other similar examples of this chandelier, one is at Chatsworth House in Derbyshire and a larger two tier version can be found in the Chapel of Emmanuel College in Cambridge. The latter also acquired their chandelier as a gift in 1732. The Henniker family’s fortune dwindled in the 19th century and much of Thornham Hall was pulled down and the remainder burned down in 1954. The chandelier was acquired by the Winterthur Museum in Delaware USA where it remains to this day.

In the 1980’s, English Heritage asked Wilkinson to make a reproduction chandelier for Chiswick House, a large Palladian villa to the west of London. English Heritage had searched unsuccessfully for several years to find a suitable chandelier to hang in the Upper Tribunal better known as the Domed Saloon. A very early example of an English crystal chandelier was sought and with the help of the museum’s curator at Winterthur, photographs and accurate measurements were obtained allowing Wilkinson to make their reproduction.The Thornham Hall chandelier has become our most popular 18th century reproduction and we now make a smaller and larger version.

The chandelier has 10 solid candle arms which are plain and without cutting or decoration. By the 1740’s most crystal chandeliers had cut and decorated arms with flutes and thumb cuts. It has slip over “grease pans” which were designed to catch the drips of wax. It has a baluster shaft, ball shapes and bowls cut in flat planes and low relief diamonds. Being the earliest of designs it has no added ornamentation of crystal pendants or decorative motifs. It has a heavy cast brass receiver plate that houses the arms and a trefoil pattern suspension shackle.

Each crystal piece is skilfully blown by our own glassmakers to the exact shapes and profiles of the original and then hand cut and polished by our glass cutters, once again to exactly match the original designs. The glass is full lead crystal, and can be specially ordered in a grey tinted lead crystal if preferred. The metalwork consists of a hollow steel central barrel covered with silver plated brass tubes, with a gilded trefoil shackle, receiver plate and turned spacers. The chandelier can be ordered in different finishes, for example all gilded, distressed silver or antique brass.

The glass candle tube on the end of each arm is fitted with a bespoke turned brass “savall” to hold either a real wax candle or electric candle. The arms are solid so the wires are attached to the outside of the arm with fine silvered wire. Dimmable LED lamps are normally supplied with the chandelier and can be ordered with UL wiring for the US.

Included with each chandelier is a ceiling plate or canopy, 1 metre length of chain and a decorative S hook, all finished to match the metalwork of the chandelier. 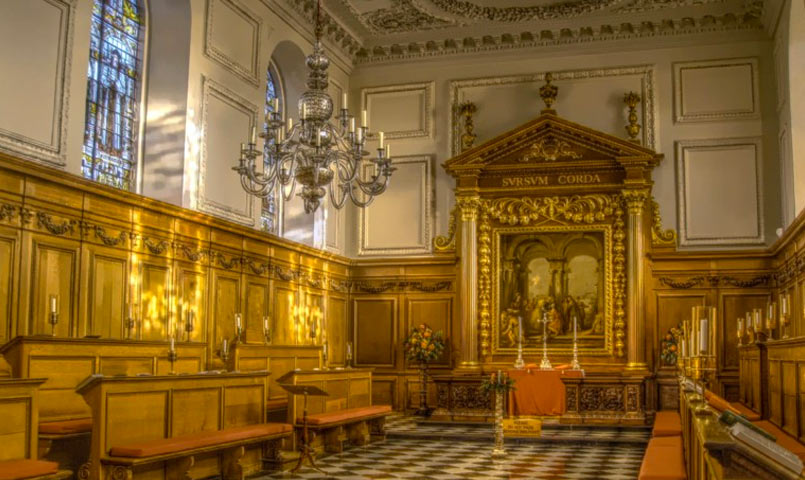 The restored two tier version hanging in the chapel at Emmanuel College.