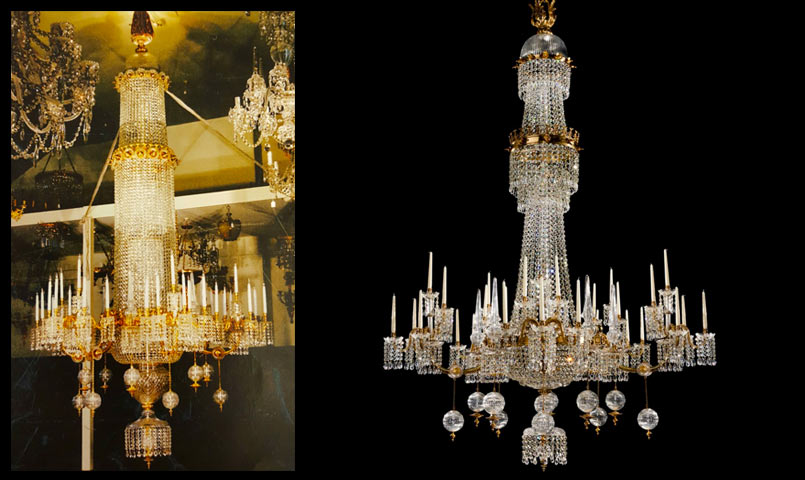 The chandelier is one of a pair that are being restored by Wilkinson (but was one of three). Originally designed for use with gas, it has been adapted to hold wax candles, each of the 5 arms holding 6 candles and can be wired for electricity if required. Restoration works included the manufacture of new lead crystal pieces which were hand cut in out Kent workshops to replace any that had been damaged beyond repair or lost and turn up any corresponding metalwork. A majority of the original metalwork was still present and useable and just required gilding and lacquering.

They were likely made by Perry & Co. for the Manchester Assembly Rooms when they opened in its Cheetham Hill Road location in 1857. The building was designed by architects Mills and Murgatroyd with interior design by John Gregory Crace, who had worked on buildings including Windsor Castle and Buckingham Palace. The Rooms hosted a variety of dances and balls in splendid style, attended by all the wealthiest socialites for almost 100 years, but by the mid 1900’s the wealthy moved to the suburbs of Manchester. The building was bought 1960 by the former Lord Mayor of the city (Alderman J Fitzimmons), but unfortunately it was not to continue holding dances and banquets, but to store tyres in for his motor business. Sadly the chandeliers that hung in each of the 3 domed compartments were not the most convenient fittings for the intended business and so were swiftly dismantled and removed as were all of the original fixtures and fittings by 1966, in the subsequent years the building was demolished and turned into a petrol station.

It was quite a challenge to hang the chandelier for photographing as it is over 3 meters tall and weighs just over a massive 150kg. Thankfully we have winches installed at our secure storage facility which are high and strong enough to allow us to hang pieces like this. We do not know the full details of how the suite of 3 chandeliers became separated into a pair of the smaller chandeliers and the central larger chandelier being on its own, but are very grateful to have the opportunity to work on these historical fittings. We are still working on the restoration of the second chandelier in the pair, but once complete the pair will be available for purchase, so if you have any questions about these at all please do contact us for more details.